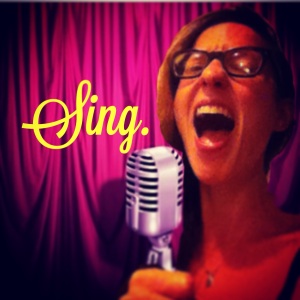 I was an awkward kid.

Chubby, unpopular, and supremely geeky – I was a lone wolf – with terrible glasses. And, while I was painfully aware of this reality, I was also accepting of the fact that there wasn’t much I could do to change it. My prep school was a popularity contest I would never win. So, I lived for the weekends. I’d sit at home, alone, watching Molly Ringwald movies, aspiring to her unsurpassed level of chic-geekdom — one I would never achieve.

In the 7th grade, I thought I’d made my big break. I got one of the lead singing roles in the school play. When I saw my name posted at the top of the cast list, it set off firecrackers in my soul. Behind me, the popular girls were huddled up, whispering and laughing. But, for the first time, I didn’t care that they were making fun of me. I was going to be a star.

We rehearsed for weeks on end. I sang and sang and sang. Kids who’d never given me the time of day before were coming up to me and telling me I had a great set of pipes. My fat-kid heart didn’t know what to do with all the attention. So, I just kept singing. It was enough. It had to be. It was my only ace in the hole.

The night of the big show, I walked out on stage. A blue-tinted follow spot guided my chubby ass to center stage. I saw my classmates in the audience, 100 blinking hyena-eyes in the dark. I felt my heart, near explosion, clattering against my ribs. The music played. I sang. Everyone clapped. And, in that moment — the applause, the hot lights, the rustle of paper in the orchestra pit — I was enough.

After the show my parents gave me hugs and flowers in the lobby. Then, like nothing had happened, we drove home, my bouquet laid neatly across my lap. The popular girls went out to a diner together for ice cream sundaes. I was home alone again with Molly Ringwald. The play was over. My star, extinguished.

My search for enough started long ago. No matter where or who I’ve been, I’ve never felt fully sufficient. I’ve always looked to improve in some way. Do more. Give more. Be more. And yes, eventually, drink more. I did all this with the idea it would make me better in some way. Every relationship, job, or activity I get involved with — I always wonder if, this time, I will be enough.

I dream I will find this perfect place of enough-ness where I can do no wrong. It hasn’t happened yet, and I’ll tell you why — I am already enough.

No one told me on the night of the play, but, I would learn later: Ice cream sundaes with mean girls who made me feel like a worthless bug every day of my life– was not the prize. The prize was that I stood up on that stage and sang. I gave away my goods. Fearlessly. I opened my big-geek-mouth and I sang for those snickering bitches. No one paid me. No one offered me friendship. At best, I got a compliment or two from a few moms in the lobby. I sang because it made me feel like I existed. That spotlight, it lit me up. Chubby. Little. Me.

In times of frustration, when I throw up my hands and say “I’ve had enough!”, I return to my own, true self. In my surrender, I become enough. Suffering is the conduit that brings me to my authenticity. On that stage, I stood judged, but, I stood tall — chub and all — authentically me.

Enough doesn’t look one way. Enough is its own entity. We can be geek priestesses and pop stars simultaneously. One does not diminish the other, and, both are sufficient. Enough is not a quantitative word — nor is it qualitative. Enough accepts what is.

So, walk to center stage and sing, Goddammit. Sing your existence. Sing your enough-ness.

The audience — doesn’t matter. The play’s the thing.