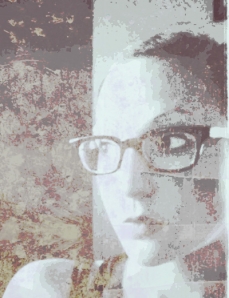 Sometimes, I don’t know myself.

Getting sober has been a crazy evolution.  I’ve glided, then bounced, through various stages of metamorphosis. But, despite charting my own movements, I’m still a stranger.

What’s even scarier than not knowing the person I’ve become — is liking her. She sees things in a new, easy-going way. She’s funny. She doesn’t care about crap that doesn’t matter — for the most part anyway. She’s more and more consistent with every month that passes. And, sometimes, that means she’s a consistent mess, but there’s a stability in her clutter that feels like some kind of Darwinian progress.

She’s shown me that when I let myself cave and make some room,  I have the ability to develop into a different, better version of myself. For a time, I kept things as small as possible — contained them. I used to think that if any one thing got too big — it would all go to shit. Back then, I was set on taking things. Now, the space I inhabit is given to me. There isn’t an internal struggle for territory any longer. I’m kinder to myself. I respect my own wisdom. And, while I will still break my own rules, my own promises, and occasionally my own heart — I know that I can trust myself to see things as they are.

A fog has lifted. My mind no longer talks in a desperate, panicked voice. I’m less apologetic: Life’s too short for desperation. — Take me or leave me.

This stranger I’ve allowed to inhabit my space — I listen to her — even if I choose to ignore her advice. Like me, she is sensitive and pragmatic, but, she knows where a bit of tough love and recklessness will serve her — and us. She has good ideas. Sometimes, I even think I trust her.

So I do this thing — this dancing with myself. And, it’s not so bad. We cut a rug almost as well as my father and I do at family weddings. This woman suit I wear — it fits better than when I first tried it on. I’m almost comfortable. Maybe the older, more rigid version of myself has finally softened. And, suddenly, this person I never intended to be — the one I avoided — has become the best version of me yet. Go figure.

Sometimes strangers will offer you candy — let yourself be tempted. This other version of me — She was patient. She was kind. She moved slowly, allowing me to change without seeing or feeling it. She snuck into my day to day being. And, just like that — I was someone new.

Like a chameleon, I shed that skin — old feelings and people — it feels good. I discover that those things we hold on to so desperately are the things that we need to let go of most. Discarding the older version of yourself, the one that no longer fits, is liberating — like tossing out your “fat jeans.” It’s more than a costume change. It’s a declaration.

Give in. Go without a fight. Evolve.