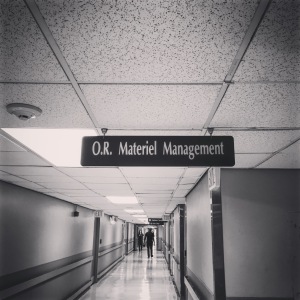 My cousin is halfway sleeping in her E.R. hospital bed.

I wait, pretending to read my book, for a doctor or nurse to slide back the glass door and walk in with some kind of news. Any news. But, for the last hour: Nothing. So, I shift my weight when my left ass cheek falls asleep and try to make eye contact with the nurse behind the sea-foam green hospital curtain. When she ignores me, I decide I need more coffee.

I have a yellow-sticker-name-tag that reads: E.R. VISITOR B30. This gains me easy entry to the E.R., much to the chagrin of the young man who has been arguing with the receptionist just outside the automatic doors. “Sir, until you can tell me her room number, I can’t let you in,” she says, almost chiding him. “She’s in B!” He shouts. “I told you that!” He flips his finger across the screen of his phone frantically, searching for something he knows isn’t there. “Sir, the entire floor is B. This is the basement.”

I’ve spent more time walking around hospital hallways in the past few years than I care to remember, I know the drill. Here, even when danger isn’t imminent, there’s something unsettling in the air. The sterile smell of plastic packaging and hypoallergenic laundry detergent. Muted colors. Whites and cool blues, aqua scrubs, and the occasional nurse sporting royal blue or purple for flair. The E.R. has a strange way of being quiet and loud simultaneously. People speak softly in static whispers and calm tones while, around a corner, a woman moans. A man sits in a low-riding gurney near the nurse’s station with his arm tied in some sort of makeshift sling that he’s obviously fashioned himself. He glares at me as I walk by him, for the third time, on my way upstairs for, yet another, cup of coffee.

At the Dunkin’ Donuts, next to the food court, there is a line eight deep. All hospital staff. They look at me with the same look I used to get at the hospital back in Oregon, where I spent a few months practically living in the cardiovascular intensive care unit with my then boyfriend. Nurses and doctors always shoot you that combo-look, pity and curiosity. You never can tell what that cup of coffee means to the person behind you in line. And, even amidst the sickness and sadness, there is something endlessly fascinating about hospitals. A permanent transience. A place where, between coffee breaks, it really is life and death.

In the hospital, everyone has a story. The stranger in the line next to you at Dunkin’ Donuts, might have lost their child, or husband, or sister. Maybe they have a brand new granddaughter. Maybe their brother is getting his first round of chemo. Maybe thier wife has had the hiccups for three days straight.

A doctor confirmed the diagnosis just minutes after my cousin returned from her CT scan. But, two hours have come and gone and we’re still waiting for the surgical resident to come and tell us what’s what. Even with a book and an extra large cup of coffee, time drags its heels while you’re waiting for someone else.

It occurred to me when my cousin’s eyes began to flutter awake — it’s waiting that humbles us. Humility is the moment that exists between fear and understanding. — It’s the unknown. — And, it’s palatable.

The surgical resident comes down and tells us that the O.R. is slow today. He’s going to call his attending and get my cousin set up shortly in the next available O.R. He says all this very nonchalantly, as he points, with his well-manicured surgeon-finger, to the line where my cousin needs to sign her consent form. To deflect our fear, we talk Grey’s Anatomy when he leaves the room. — He doesn’t hold a stinkin’ candle to any of the residents at Seattle Grace Hospital.

So often we think that an action will lead us to our own Humility. We think taking some step, performing some act of heroism or remorse or martyrdom gets us closer to being truly humble. But, as I sit in the O.R. waiting room hoping to get word that my cousin is out of surgery, I start to realize that it’s the white space that brings us to our knees.

On the couch across from me, a woman flips through an L.L. Bean catalogue, but, I can tell she isn’t looking at the glossy pictures. She’s just turning pages. She’s giving herself an action to perform. A movement to remove herself from her ultimate act of Humility — Waiting. She’s just sitting there, stewing in her own powerlessness. Another man stands beneath the giant TV screen that’s mounted on the wall. He has his hands on his hips and his elbows are pointed out like arrows towards both ends of the waiting room. He looks up at the screen, but, he’s not watching. He’s waiting. Waiting for a good word. A bad word. Any word. — It’s in spaces like these we learn how to care and feel and hope. Even when we think we are humble enough — there is something that can make us wait. There is something that can make us understand what it is to be small in the wake of love.

Before the family liaison has time to tell us, my cousin texts her husband to let us know she is out of the recovery room and in her own room on the fifth floor. When we walk in to greet her, she is buried beneath sixteen hospital blankets. “They were all heated when I got them. The nurses downstairs hooked me up because there isn’t a blanket warmer up here.” She says half smiling and half wincing at us and she shifts under her mountain of, now room-temperature, blankets.

I lean on the counter across from her hospital bed and we laugh about how many times she’s had to pee between consuming cups of multi-color, sugar-free Jell-O. And, it’s in these small moments, I feel lucky that in the life and death game being played here, inside these walls — we’ve won.

Humility is the relief we find in the things beyond us — the things that quiet the static hum we mistook for sound. The things that only make noise until waiting makes them silent.