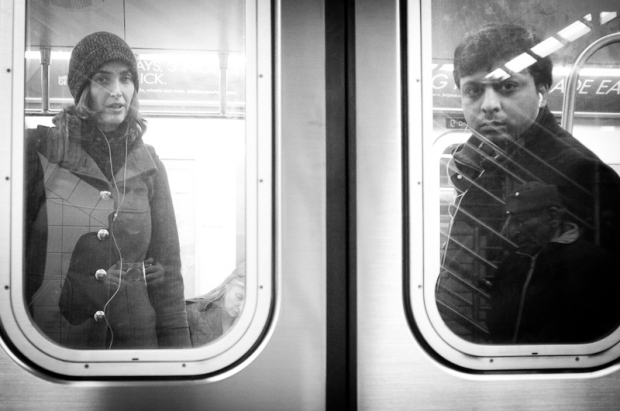 Every time the conductor cries out “Stand clear of the closing doors!” and the bell chimes, I have a sort of epiphany.

It’s been awhile. But, I’m back on the train — literally and figuratively.

These moments. These people. These — STOPS. I think about them. With every little movement, something huge shifts. Someone changes. A woman turns the page of her book. A kid shoves his scooter under the orange and yellow seats. A guy stuffs a bagel with cream cheese into his face and the white glop oozes out the sides of his Everything and over the wax paper and down his fat, pink fingers. — It’s a show. A glorious fucking show.

I sit on the 2 train, awed. I wonder — Have I been gone so long that these vignettes of mundane existence, these glimpses into the drudgery of everyone’s daily, city commute, have suddenly become the most romantic thing in the world? Maybe it’s because I’ve only been home for a month. And, sure, everything is still shiny and new. But, no, the more I think about it — it’s so much more than that.

I boil it down to get to what’s different and, — I think it’s sobriety. And no — not just the fact that I’m clean and sober — whomp, whomp, patontheback, patontheback — it’s more. It’s one of the side effects of sobriety that have slowly begun to crop up. A kind of gift. It’s something I was denied while I was living here years ago, but now, I suddenly have access. And that, that thing I’ve finally tapped into — is the ability to admire the machine of which I am part.

Here, in  New York City, sober, I have allowed myself to become small again. Something I never could have permitted myself to do before. Back then, I wanted to be a big fish. The biggest fucking fish in the biggest fucking sea. And, blazing forward in my self-obsessed fury — to become and to have and to live and to consume — I missed it. I missed the incredible beauty of living a small life. I never saw these little pieces. The city under a microscope.  I never appreciated the infinite and tiny parts of this incredible and unique place that, without asking anything in return, surrounds and envelops me with beauty and intrigue.

All this. Right here. A big sea. A HUGE FUCKING SEA. And me, somehow, no longer terrified of being a guppy. To the contrary — I wish I were smaller. I want to see it all come up around me. My eyes well up as we clatter through the dark tunnels of the NYC underworld. I keep thinking of all the things I missed while I fought so hard trying to get upstream. — All the pages that were turned, all the scooters that were shoved, and all the cream cheese that was oozing. — And, I missed it.

But, I catch myself and I smile when I hear it again. — “Stand clear of the closing doors!”

And, one last straggler — a man in a suit with a missing button — squeezes through the metal doors and joins our little school of fish and, together, we all dive beneath the waves of the East River.