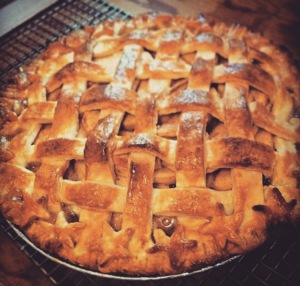 Ten years ago, I became obsessed with baking pie.

This obsession came years before I got sober or became a vegan. At twenty-two years old, the fire-water-fuel for my pie-baking frenzy was almost exclusively pint glasses filled with vodka-cranberry. And, all my pans were slathered with rich, Irish butter.

My pie-making phase was the result of, what can only be described as a difficult time in my life. I had just graduated college and I had no idea what I was doing. Thrust into the world with a BA in Creative Writing and Irish Studies, I was well equipped for absolutely nothing. And so, I sat in the living room of my apartment and read every pie crust recipe I could get my hands on.

Even with absolutely no direction, I did know one thing: I was going to make the best damn pie ever baked. And so, it began. I spent the first few months perfecting my crust. First, one made with butter. Only butter. Then, shortening. Only shortening. Then, a combo of the two. Then, back to butter alone.

There was a time, I made a pie almost every day, but at the very least — three times a week. My boyfriend and I had friends over for dinner several times a week just to avoid the sheer surplus of pie. Banana Cream. Raspberry Chiffon. Chocolate Mousse. All-American Apple. Blueberry, with a lattice top. Pumpkin-Pecan. Cranberry-Pear. Sour Cherry. Lemon Meringue. — I could go on.

As I’ve grown and changed in sobriety, my perfectionism, my drive to achieve, and my need to create things seamlessly has changed quite a bit too. I’ve learned about the unhealthy patterns we create in our desperate attempt to save ourselves from the thing we fear, usually — the unknown.

During my great pie period, pie was more than just a relaxing evening in the kitchen. It was tangible evidence that I hadn’t failed. My truth was baked in, and, you could taste it in every flaky, buttery slice. If nothing else: I was a fucking baker of pies. And, even when I did fail — yes, some of my pies were completely inedible — I had a new goal. I was going to make that pie again, and, this time, it was going to be so good it would make Martha Stewart weep.

Almost exactly a decade later, I’m starting to realize that if you want to learn, grow, and truly change there’s only one kind of pie we should strive to bake perfectly: Humble Pie.

I’ve spent a lot of my life struggling to do things on my own. Because, I always thought that asking for help was a weakness. I thought that admitting that you couldn’t be perfect on the first try was a sure-fire way to get overlooked. But, sobriety has taught me that if we are going to strive to be perfect at anything, we have to be open to letting others tell us what they see (and taste). We have to be open to criticism. We have to fork over a piece of our pie and be comfortable with being told that the filling is way too jammy and the crust is far too soggy.

Humility is a confusing word. It’s often accompanied by negative connotations. And, that’s why I’m devoting the seventh month in my Year of Happiness to Humility and its nuances. Humility isn’t negative when it is practiced in it’s truest form. Being humble is being able to step back and appreciate that something supersedes you — it’s accepting that fact that you’re not always the absolute authority. Humility is possessing the ability to learn, with grace.

So often, we lump Humility in with martyrdom. We step back for show. We let someone else take the stage because we think it will look good for us — but, false Humility stinks of insecurity. And, insecurity is one of the main reasons that we find it so difficult to admit that — THE PIE JUST ISN’T ON POINT.

In the dictionary, Humility is synonymous with “meekness,” “modesty,” and “unassertiveness.” But, I don’t think that’s always true. I think that being able to step back from one’s self and see where there is room to grow — is straight up ballsy. I think it’s inwardly assertive. I think it requires a strong backbone, grace, and confidence to be truly humble. Learning isn’t easy. If it were, we’d all be experts and scholars. Change requires facing the unknown, and, being willing to fuck up.

These days, I don’t bake as much as I used to, but, I still love it. And, even though I perfected my crust ten years ago, a few years back, I had to start from scratch when I went vegan. I’ll be the first to admit, margarine isn’t the same. But, I’m learning. And, I can still make a vegan lattice top pie that would make Julia Child proud.

The truth is — I don’t need pie anymore. I find comfort in knowing, I don’t have to be the best and neither does my pie. And, if people don’t like my aquafaba meringue, fuck ’em. More snacks for me. But, I know I still have to bake, and eat, a Humble Pie on occasion. Because, unlike ten years ago, today, I am open to suggestion and I’m ready to fail.

So, take the pie or leave it. But, if you take it, I recommend the Pumpkin-Pecan.